As part of VIVID 2012 the Argyle Cut, a well know historic feature at The Rocks in Sydney, came alive with flowers and vines growing out of the sandstone. The installation was programmed to gently fade in and out over a two-minute cycle that showed off the texture, shape and colour of the cutting.

The quality of fixtures and gobos were paramount to the success of the installation. SPX profiles from Philips Selecon as well Pacific Profiles and Robe colour spot moving heads were used. Each was fitted with full colour glass and steel gobos. 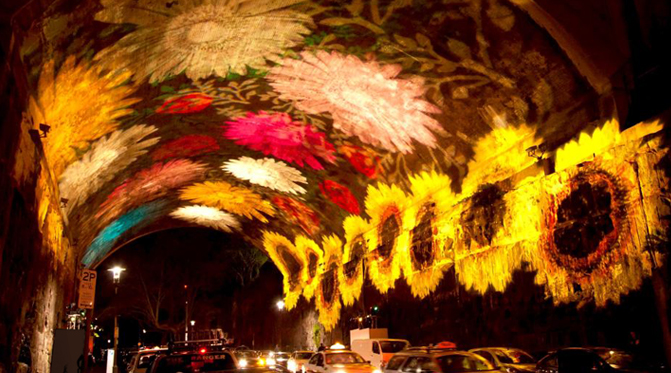 Andre Kecskes created Harbour Wave for VIVID 2015. The large, curved installation mounted with rows of coloured lights was inspired by the destructive power of tsunamis. 20 metres long, 6 meters high and 5.5 metres wide, the lighting sculpture used 1066 LED bulbs. – LED bulbs have a very low energy consumption (only 2W per bulb) and generate no heat, making them safe to touch.

This interactive light sculpture created for Sydney’s Smart Light Walk 2009 featured rainbow colours projected on this throughfare, so people became part of the artwork as they walked by. The colours also slowly moved through the spectrum, each colour reacting differently to the sandstone wall and paving surfaces providing a mesmerising spectacle.

Only LED lights were used as they are safe for both heritage listed structures and people, as they contain no UV rays. Pier One Sydney Harbour hotel commissioned this art installation to their façade and adjacent streetscape for VIVID 2012.

Working with the heritage setting the old street lamps were dressed in sparkling lights and the architecture accentuated with shafts of light to create a romantic and magical feel so visitors could rediscover this alternative and breathtaking view of Sydney Harbour and the Bridge. 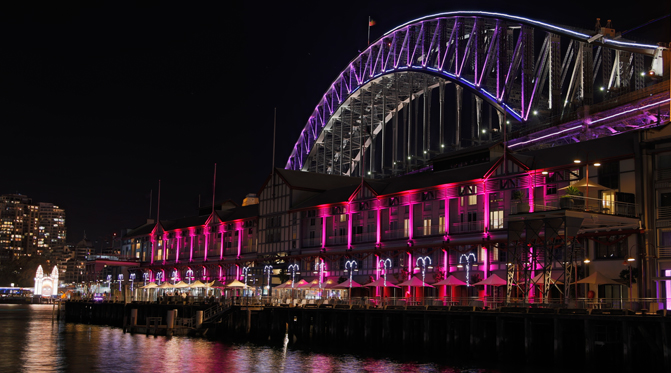 An ‘eye’ catching installation was created for VIVID 2014 at the iconic and historic Fort Denison Martello Tower as a nod to one of its uses as a navigation guide. The piercing beam of the lighthouse beacon was magnified and bathed in a rich colour palette that changed every ten minutes.

The heritage listed site was a major design consideration and the latest LED technology was used for solid colours and Selecon beam profiles with full colour glass gobo to create the eye. 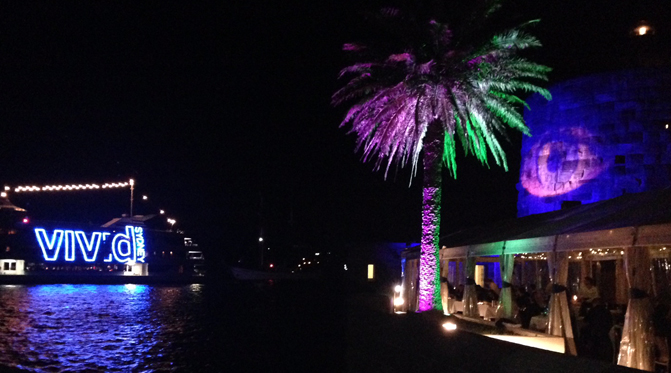 A playful artwork for Sydney VIVID 2014 designed to reawaken the senses by asking viewers and passers by to look in the nooks and crannies they would normally ignore. Suddenly, as you walk up or down the stairs, patterns start to flow and stutter. Lights ripple and jump an organic multi-hued shapes transmogrify into block colours. 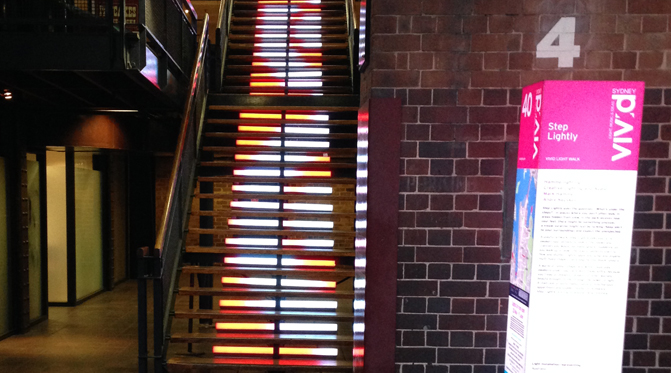 Run is based on the stick figure flip book drawings that many of us have created in the page corners of a school exercise book. It is a timeless study of the action of running broken down into lines and circles. Like the flip book each lighting figure created for Sydney VIVID 2013 is a single study, but when joined together in a sequence, like flicking the page corners, the study takes on a personality of its own.

Figures are 4.5 metres tall and up to 5 metres wide. 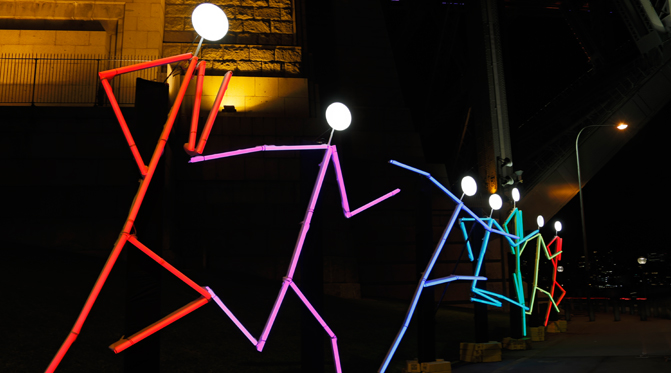 The Conservatorium of Music open day in March 2009 featured a giant red cylinder standing outside that emanated musical sounds generated by the wind. Designed by Sydney architect Joe Snell, it is an interpretation of Bruce Chatwin’s book Songlines and the way Indigenous Australian’s told stories and sang songs to communicate pathways across the terrain.

The lighting design further enhanced the theme with a powerful light source in the middle of the cylinder representing sun and energy. The shades of light varied between dawn and dusk, ranging from translucent glows to radiant bursts.